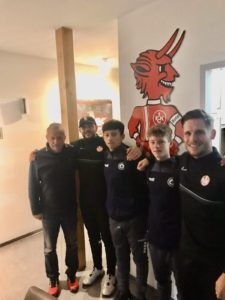 Lagrange, Atlanta held a soccer camp with ProSoc which back then no one would have expected would become a journey for longer than five days. During the scheduled camp, the following players were identified; Anthony Castillo, Elvis Castillo, Adry Matias, Reid, and Dillon Morman were invited to train with FC Homburg, FC Saarbrucken, and 1 FC Kaiserslautern, while Adry was invited to SV Elversberg team. After a solid week of practice, a big surprise happened.
Elvis receives an invite from 1 FC Kaiserslautern (2. Bundesliga) to play on their U16 team as well as an invite from FC Saarbrucken (3. Bundesliga) Reid was invited to Saarbrucken, and Adry was invited to play for SV Elversberg youth academy team that is projected to play Bundesliga next season.
This is a great testimony that nothing is impossible in the world of Sports. ProSoc has been nothing far from great. During the duration of the sessions, Sebastian and Herbert Korst guided all of the players into the European way of soccer and provided the highest level of knowledge and expertise to the parents, players, and all others involved. They viewed all players, discussed the differences between the clubs and international soccer, introduced the players to high-level coaches and staff, and ensured that everyone was well-informed and welcomed.

Aside from soccer, the families took time to explore and experience  European culture by visiting Luxemburg, Strassbourg, Heidelberg, and Bad Homburg, and of course, eating good German food in local non-tourist restaurants.

We hope to continue to bridge the gap between American and European soccer and offer an opportunity for exposure for trials in Europe to more players.